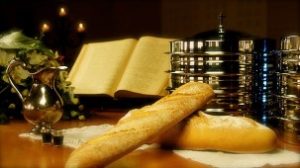 The second week in March is when I began hearing the Holy Spirit say,

At first, I didn’t think it any different than other times the Lord’s impressed upon me to do this.  I was obedient and did as instructed, anointing myself, as well as the door posts of my home, pleading the Blood of Jesus over all.  But even after obeying His instructions, I continued receiving the same message.  He then began to show the fullness of what He’s calling upon His people to do in this hour.

The Lord began pointing me towards the Passover coming up on April 9th and stressed the need to review the original Passover:

In Exodus 11, Moses tells Pharaoh about the plague (death of the firstborn) God would bring upon Egypt for his refusal to let His people go. After describing to Pharaoh what was going to happen, Moses said:

“But against none of the children of Israel shall a dog move its tongue, against man or beast, that you may know that the LORD does make a difference between the Egyptians and Israel.”  (Ex. 11:7)

In Exodus 12, God gives Moses instructions for observing the Passover. The families of Israel were to choose a lamb or goat without blemish, and kill it at twilight.  They were to take some of the blood and put it on the sides and top of the doorposts of their house.  The sacrifice was to be cooked and eaten in their homes, and they were not to go outside until morning.

God told them “On the same night I will pass through Egypt and strike down every firstborn…and I will bring judgment on all the gods of Egypt.  I am the LORD.”

“Now the blood will be a sign for you on the houses where you are. And when I see the blood, I will pass over you; and the plague will not be on you to destroy you when I strike the land of Egypt.” (Ex. 12:13)

God is calling His people out again!

“Wherefore, come out from among them, and be you separate, saith the Lord, and touch not the unclean thing; and I will receive you.” (2 Cor. 6:17)

“And I heard another voice from heaven, saying, “Come out of her, my people, lest you share in her sins, and lest you receive of her plagues.” (Rev. 18:4)

He’s calling His people out of this world, that we receive not of her plagues, and telling us to,

Jesus gave His disciples specific instructions as they observed the Passover together:

“The Lord Jesus the same night He was betrayed took bread.  And when He had given thanks, He broke it and said, “Take, eat: this is my body which is broken for you; do this in remembrance of me.”  In the same manner He also took the cup after supper, saying, “This cup is the new covenant in My blood.  This do, as often as you drink it, in remembrance of Me.” (1 Cor. 11:23)

Brethren, something very significant is taking place – it’s huge!  The entire world is in various stages of “Lock Down.”  What’s being attempted by the wicked one is much greater in scope than just containing a virus.

God’s calling upon His people to come out of her.  He’s giving specific instructions, as He did Israel, to come under His shelter of protection.  We are to place the Blood of Jesus over our doorposts.  This includes not only the doorpost of our heart, but our physical dwelling.

Draw near to God as never before.  Jesus said the Holy Spirit will remind us of His Word, lead us into all truth, and show us things to come.  Remember, as we leave “Egypt” we must keep our eyes fastened upon Him.  We’re now entering the “Uncharted Territory” the Lord spoke to me about last September.

Please take what’s been shared before God in prayer, as there’s much more the Holy Spirit wants to impart to each of us.

As a personal note:  I plan to anoint the doorposts of my home as the sun sets April 8th (evening before) to represent the blood of Jesus.  Afterward, I will take communion as Jesus directed his disciples on that night.  This Passover I will not leave my house until morning…