“The Lions Are Roaring!” 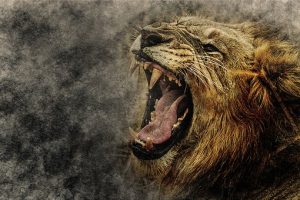 I’d like to share a portion of what the Lord spoke to me throughout the night of April 16, 2020, but first need to explain what preceded this “admonition” and word of encouragement to His people.

When worldwide lockdowns surrounding the virus began, I started going online several times a day to get updates on what was happening.  The plan to subdue the masses and take control of every aspect of our lives seemed to be playing out around the world.  Of special interest to me was what appeared to be a general move against the Church.

The Church not only was considered “non-essential” by many state/city leaders, but seemed to be receiving targeted persecution.  Also, talk of an eventual “vaccine” to be given to every human on the planet seemed to be the exciting news of the day.  “Their” plan is for it to be required to function in society: obtain employment, go to school, travel, buy and sell in the market place.  The list went on and on…

I won’t go further because I only wanted to set the stage to better understand what happened the evening of the 16th.  Here I was, focused on all these events going on “out there,” scurrying about trying to prepare, when I noticed an anxiousness growing in my spirit.

God soon revealed most of what I was doing to be fear-based.  I’d gone about doing what I thought should be done.  To be honest, I was having a difficult time being still before the Lord in order to hear Him.  But once He got me settled down, I repented and spent the rest of the day praying and feeding my spirit with His word.

Retiring approximately 9:00 pm that night, I immediately went into a deep sleep.  All through the night I heard the Lord speaking.  The following is part of what was spoken:

“My people are afraid to let go of this world. They are kept in bondage through fear of death.”

“The lions are roaring!  Who among you will shut the mouth of these lions?

“Remember, you are not of this world, as I have chosen you out of the world.

“You are My ambassadors and your citizenship in heaven!”

“The news of the coming Kingdom of God is the REAL news, and you are My witnesses!”

“You are the light of the world and will not remain hidden.  For you must be put upon the lampstand to provide light for all the house.”

“I alone will be glorified, and every knee will bow to Me!”

“As the world hates Me, so will it hate you.  Remember what I told you, “What was before will be again.”

First let me say, I’m ashamed of my initial response to the swirling of this storm. The Lord’s already shown fear and confusion to be the favorite tool of the devil.  It’s used to overwhelm and paralyze the saints, allowing them to be covered with a cloud of darkness.  He uses fear of death, fear of our physical safety/needs not being met, to enslave the masses.

Once we turn our focus towards the broadcasting/plans/threats of the enemy, we begin taking anxious thought, and enter dangerous territory.  Make no mistake about this:  We – the Saints of God – are the main target!  The devil knows without a doubt he needs to keep the Church separated and silent.  He’s terrified of God in us, terrified of the thought his fear mongering won’t be effective enough to keep us cowered down in a corner in fear and confusion.  The devil has every reason to be terrified!

God says, “Why do the nations rage, and the people plot a vain thing?  The kings of the earth set themselves, and the rulers take counsel together, against the LORD and against His Anointed, saying, “Let us break their bonds in pieces and cast away their cords from us.”  He who sits in the heavens shall laugh; The Lord shall hold them in derision (ridicule or mockery).”  Psalms 2:1-4

We must remember, the roaring of the lions, or growling of the wolves, whatever beast the enemy uses to encircle the camp of the saints, are nothing to God.  He sits in the heavens and LAUGHS!  He confounds the counsel of the wise and turns their knowledge into nonsense!

God says the lions are roaring, and is asking who among His people will shut the mouth of these lions.  The Word says the righteous are as bold as a lion (Pro. 28:1).  We’re told to consider the saints of old who through faith subdued kingdoms, stopped the mouths of lions, and out of weakness were made strong (Heb. 11:33-34).

Jesus said we are not of this world, that our citizenship is in heaven.  We are ambassadors of Jesus, THE KING of kings and Lord of lords – and of the coming Kingdom of God!  He is the King to be glorified!  It is before this King EVERY KNEE WILL BOW!

The news of HIS coming kingdom is the REAL news, and we are His witnesses!  Jesus said we are the light of the world, and cannot remain hidden.  We must be put on the lamp stand to provide light for all the house!  This directly ties in to the last thing God spoke to me that night:

“As the world hates Me, so will it hate you.  Remember what I told you, “What was before will be again.”

As mentioned in previous posts (related links below), a major division is soon coming within the church.  Those who continue to kowtow to the god of this world will stand against those who arise to do the works of Jesus. As it was in the beginning, so will it be again (read book of Acts).

God’s giving a heads up, telling us, “Gird Yourself!”  The day is rapidly approaching, and even now upon us, when those who speak and do as the Holy Spirit leads will come into major conflict with the rules of man.  Jesus described the end times before His return as a time when His followers will be hated of ALL NATIONS for His name’s sake (Matt. 24:10).  This will be a global hatred, not just here and there.

Saints, may we not allow the roaring of the toothless lions to distract us.  May we keep our eyes fastened upon God, giving Him praise and thanksgiving for this precious time.  As previously shared, He told me from the beginning this was a “Practice Run – Dress Rehearsal.” We’ve been told to use this time wisely, as what’s happening now is only a “gentle” shaking, a precursor of what’s to come.

We will fear not!  Our God is the ever Faithful One, who will keep us perfectly aligned and prepared for what’s ahead.

Please pray over this message for confirmation and further revelation of how it may apply to you.

‘Veer Off – They Are Heading for Destruction!’

‘Use This Time Wisely’

Hebrews 2:15, “…and release those who through fear of death were all their lifetime subject to bondage.”

Hebrews 11:33-34, “And what more shall I say?  For the time would fail me to tell of Gideon and Barak and Samson and Jephthah, also of David and Samuel and the prophets: who through faith subdued kingdoms, worked righteousness, obtained promises, stopped the mouths of lions, quenched the violence of fire, escaped the edge of the sword, out of weakness were made strong, became valiant in battle, turned to flight the armies of the aliens.”

Matthew 5:14, “You are the light of the world.  A city that is set on a hill cannot be hidden.  Nor do they light a lamp and put it under a basket, but on a lampstand, and it gives light to all who are in the house.”

Psalms 33:10, “The LORD brings the counsel of the nations to nothing…who confounds the wise and turns their knowledge into nonsense.”

Isaiah 26:3, “You will keep him in perfect peace, whose mind is stayed on You, because he trusts in You.”